No, not that dated relic of the American dream, the one that came with two cars and two kids and five decades of wage slavery wrapped up in a bow. No, this is the Garage that time forgot, the one that you heard about from your best friend’s older sister where the walls are always shaking and there’s plenty of room to dance and someone still gives a damn. In the Global Garage, there are no borders, and every punk, loser, and dreamer from here to Hong Kong knows the way. So come on down and join us for two hours of garage, punk, psych, and other assorted noises from around the world every Sunday from 1 to 3pm (EST) on WHUP FM. We’ve been waiting for you.

The Short History of Global Garage

In 2017 Paul Mirek learned about WHUP, a recently formed community radio station broadcasting out of Hillsborough, NC. He approached friend (and fellow former college radio DJ) Ryan Sweeney with a pitch to get back into the radio game with a focus on playing garage rock from all around the world. Thus, a radio show was born.

The format quickly evolved into more than just garage rock, dabbling in the world of punk, psych, surf, metal, and even electronica and dashes of the occasional hip-hop track. Another radio buddy from Paul & Ryan’s college radio days at WSOE joined the crew not long after and the Global Garage family grew once again.

As the DJs found their footing, they started making new friends from all around the world, sourcing curated playlists, featuring guest co-hosts, interviewing bands, as well as hosting live performances at the WHUP studio causing the Global Garage radio family to grow even more! These friends, collaborators, and hosts are lovingly referred to as the Worldwide Weirdos and they’ve set out on a quest to weave a web of connected music scenes all around the globe.

Want to be a Worldwide Weirdo, too? Tune in every Sunday from 1pm-3pm EST on WHUP (104.7FM) or online at WHUPFM.org. Or, if you missed an episode, you can listen on demand on the past show archives.

The Hosts of Global Garage 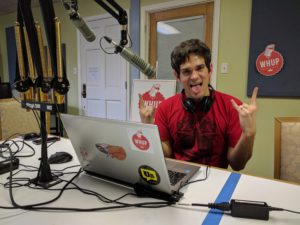 Paul experienced a spiritual awakening in high school when he accidentally tuned his radio from the modern rock station to the local college station. He spent time as both a DJ and Music Director for Elon University’s WSOE FM, where he also first met sonic soulmate Ryan Sweeney. 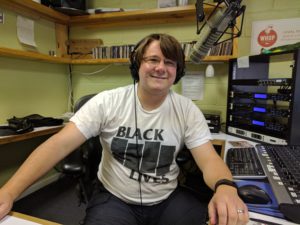 Ryan first discovered his love of radio at WSOE FM, where he spent all 4 years of college as a DJ, 2 as program director, and 1 as general manager. After 7 years off the airwaves, and a deep, dark void in his soul, Paul convinced him to return via WHUP FM to start up Global Garage; restoring balance to the force. While his musical tastes are fairly broad, he has a big nerdy spot in his heart for prog rock. Ryan also plays bass in the band Doomsday Profit.

Our Playlists So Far

Here at Global Garage, we try to play music from bands that are across the road and across the yard. We also love data, and with each show we include a playlist and map of where we’ve sourced the tunes. Below is a choropleth map of songs from each state and country over the course of the show. Our goal is to fill these suckers in! Have fun, hover over each state and country to see how many we’ve played from that location. If you see a country in grey but know of a band from that area, please contact us and send the music our way!