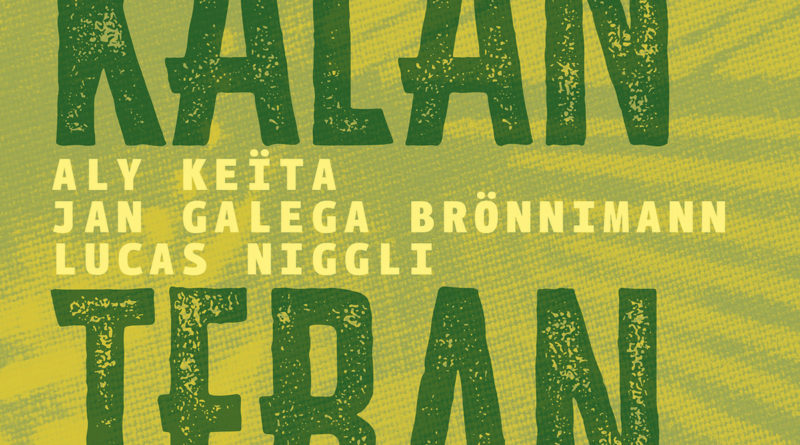 As we prepare to celebrate three years of Global Garage in March, I’m reminded once again of just how amazing it is to not only be able to find and play music from around the world, but to forge new relationships with fellow comrades across the globe as well. It’s a thought that gives me hope at a time when borders are once again in our headlines for all the wrong reasons, and one that struck me even more powerfully while listening to Kalan Teban. the latest trance-continental collaboration of Aly Keita, Jan Galega Brönnimann, and Lucas Niggli.

Keita’s musical journey began as a child from a Malinke Griot family on the Ivory Coast, where he became a master of the balafon, or African xylophone. After settling in Europe, he’s played with a who’s who of modern jazz giants before finding sympatico partners in Swiss percussionist Niggli and woodwind player Brönnimann (whose friendship stretches back all the way to their early childhoods in Cameroon). Drawing from these disparate traditions, the trio creates music that’s rich with tension: between balance and exploration, melody and rhythm, the cosmos and the world that surrounds us, here and now.

Following the recent unsettling trend of white indie rock bands from Brooklyn foregrounding African musical influences, Kalan Teban is something of a revelation. The opener “Noussandia” sets the tone with the balafon front-and-center, an inviting welcome to the band’s musical universe. It’s hard to choose favorites from what follows, but I have to say the extended jamming of “Douala” is right up my alley. Contrary to popular belief, I don’t hate all upbeat music – just the dishonest kind, and here’s the proof.

Kalan Teban is out now on Intakt Records, an independent jazz label based in Zurich. The album is available as a Bandcamp download, which includes liner notes and photos.