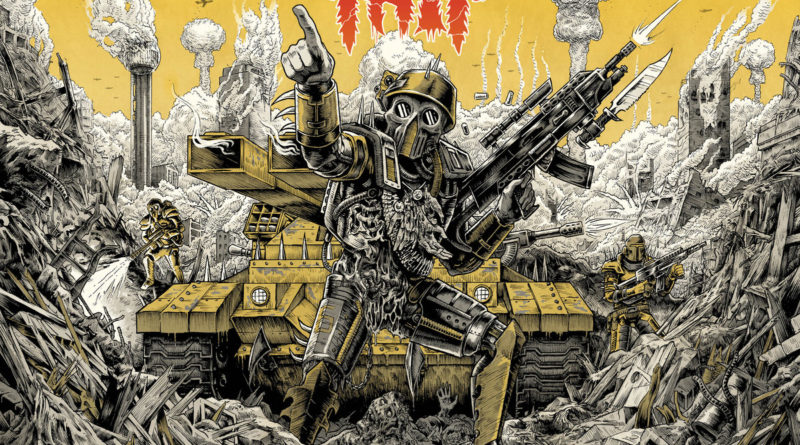 Texan thrashers Power Trip have been on a tear for a few years now, steadily growing in audience and acclaim on the backs of two powerful records: 2013’s Manifest Decimation and 2017’s Nightmare Logic. But the band is no overnight success. Power Trip’s members boast extensive resumes that include metal and punk bands like Mammoth Grinder, Vaaska, The Impalers and Innumerable Forms. (And that’s just drummer Chris Ulsh!)

Before and between full-lengths, the band issued EPs and singles as the still-young outfit cut its teeth and found its politically-charged, pissed-off-but-hopeful voice. Earlier this year, those early tracks arrived, packaged together, on the compilation Opening Fire: 2008-2014. This week, Dark Operative gives the comp a proper vinyl release.

What’s most remarkable about Opening Fire is how deftly it balances the raw enthusiasm of a new band finding its way, with absolute precision and uncanny promise. This hardly feels like a half-baked demo. Instead, the band’s mix of hardcore punk intensity with first-wave thrash’s galloping riffs and searing solos is fully formed and invigorating. Clearly Power Trip studied its hardcore and thrash forbears, from COC and Bad Brains to Slayer and Exodus, but they bring those influences together with an urgency and inspiration that keeps it from feeling like a revivalist exercise.

Charged with doomsday visions and political polemic, Power Trip’s worldview is ideally matched to its musical inspirations. Growing up in the shadow of 9/11 and America’s unending wars, the band has clearly been molded by millennial anxieties, much the same way the hardcore and thrash bands of the ’80s had been shaped by Cold War fears and Reaganomics. And, like their forbears, Power Trip brings a progressive tilt to their cautionary tales. As frontman Riley Gale told Revolver in August, “We try to make it pretty clear that we might all be white males, but this is not a band for white males to enjoy and be dumb rednecks.”

But politics aside, hearing these old(er) songs anew, it’s little wonder the progressive heshers from the heart of Texas have caught the attention of so many. At the end of the day, this stuff rips.

In which Chris reveals his hidden NPR talents.