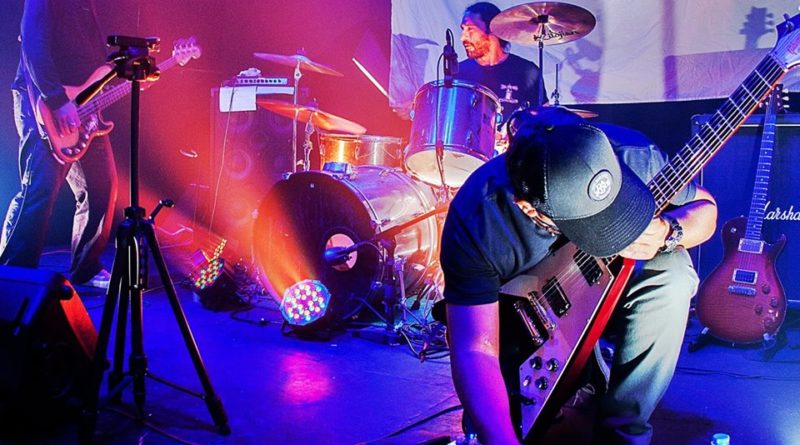 Recently we’ve been featuring a lot of bands from the Latin American heavy psych/stoner doom scene such as Satánicos Marihuanos and Familia de Lobos. Today’s “Five Questions With” features La Iglesia Atomica (The Atomic Church), a band from Puerto Rico that formed in the early 90’s and is finding new life within this burgeoning Latin American heavy psych/stoner scene. A truly global band, their most recent record Gran Muro de Coma was digitally released on Argentinian label South American Sludge Records and physically released on the German label Clostridium Records.

If you like your music like your Banksy paintings – lots of shredding – you’ll dig the hell out of this band.

We talked with the band’s bassist, and multi-instrumentalist, Agustin Criollo Oquero for this entry to “Five Questions With.” Agustin, a kindred radio spirit, hosts his own show on Astro Radio called The Freak-Out Sounds Of The Pie In The Sky. As with our show, you can find archives of his show on Mixcloud so check it out!

Oh wow, that’s a tough one since I listen to so many things but I have to say it’s between Black Sabbath Vol. 4 and Brian Eno, The Pearl.

It all started when Herb Perez (current drummer), Eduardo Fret (first guitar player) and I, dropping acid and smoking weed, jammed to one note for hours on end at least 3 days a week. The same peaks and lows from the hallucinogenic experience ruled the ups and downs of the jam, that’s why they give the impression of a long song with several parts. We used to record 90 minute cassette tapes of just one jam. However, since the old paradigm of the mainstream record industry forced us to create “proper songs” we jump to it and left the jams for the live experience. Little did we know that after more than 20 years, the impromptus, the jamming, was going to be the thing that help us get a record deal in Germany.

I am 49 years old so I started in music back in 1984 and I’ve seen many ups and downs. The Caribbean is not fertile ground for counter-cultural music movements and commercial easy listening music like Reggae Roots is king among the youth. There have been moments in our history that small creative movements have arisen like the one that started with the grunge scene back in 1989. Nowadays the rock scene in Puerto Rico is in coma after 25 years of urban sounds ruling here and the United States. However, there is a huge stoner/doom scene in Latin America and Europe taking shape as we speak and that’s were we are operating from and trying to point at that direction so others here in the island can see what’s happening and can join in.

I am a journalist by profession so I must say that a lot of literature, philosophy and plastic art. Gabriel García Márquez, Mario Benedetti, Noam Chomsky, Friedrich Nietzsche, Michel Foucault, Max Ernst, José Clemente Orozco, etc.

In which the gang is joined, and schooled in playlist making, guest hosts LADRONES.