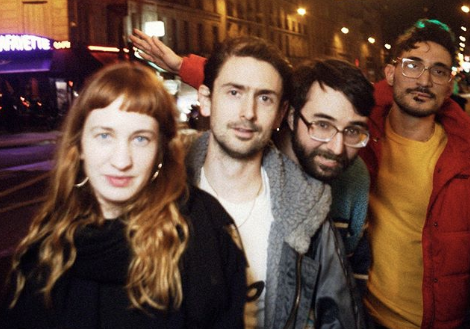 Band: No Diving
Country of Origin: Germany
Photo by: @rawjourneyparis

I was going to come up with some creative way to describe Berlin’s No Diving, but they did such an impeccable job already, self-describing as “jangle-punk to keep you spritely in the end times.” The world might be falling to shit but at least No Diving will give you a good beat to dance to while it happens. The band’s answer to question #4 might be one of my favorite responses yet, it also serves as a track-by-track summary of the songs on their debut, Rock Bottom.

Justin is currently living in Taipei, working on the second album while the rest of the band continues to play in other Berlin-based projects (Plattenbau, Gurr, Early Labyrinth). No Diving hopes to go out on a short European tour this summer.

Rikk Agnew – All By Myself

Brandon and Justin met in college in Washington DC. Sensing the cesspool that would come to dominate in Trump’s America, Justin bought a one-way ticket to Berlin on election day and left the day before inauguration to join Brandon’s band with Lewis, Plattenbau. After a year of touring and recording the next Plattenbau record (forthcoming), Justin wrote and recorded the No Diving record Rock Bottom, invited Brandon and Lewis to join him live on drums and guitar, respectively, and recruited friend and resident Goth Sally to play bass.

In Berlin, most of the attention goes to electronic artists and DJs, which means there is little upward mobility for bands but also a tight-knit and refreshingly noncompetitive scene for rock n roll. Some of our favorite venues are gone now (isn’t that how it always goes?) but Berlin is a great place to go for people who want to join a friendly scene with lots of overlap between bands.

1. Self-worth in capitalism
2. Flag politics
3. Bong summers
4. Feeling lost in half-truths
5. Falling in love
6. Knowing what you have is the result of imperialism
7. Polluted media and the impossibility of independent choice
8. Pain in the age of pleasure
9. Drug cops / Justin’s dad
10. Everyone in lock step with the nationalists

Our first show ever, in 2018 at Internet Explorer in Berlin (RIP) in 37 degree C heat. Justin wore a maternity dress and painted his nails so he would take himself less seriously, and it worked. Everyone in the room was drenched in sweat and moving with the music. We were all in that disgusting heat together, and it made for an amazing vibe. Wish we could relive that one for sure.