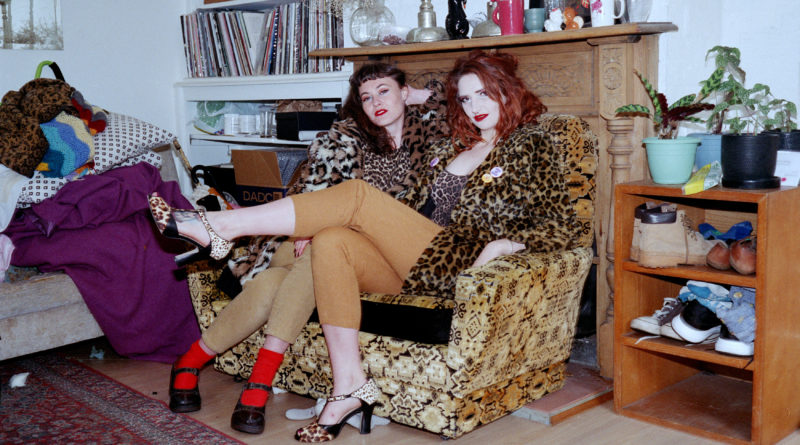 One of the brightest new stars in the constellation that is the Melbourne garage punk scene, Shrimpwitch is a stripped-down, fuzzed-up duo that makes the White Stripes sound like the Eagles. The pair of Kim Prawn and Georgi Goonsack came up as part of the Wetfest scene, the female/GNB punk fest organized by Jenny McKechnie and Grace Kindellan of Wet Lips. When Jenny and Grace founded the similarly inspired Hysterical Records, Shrimpwitch also had the honor of kicking things off as the label’s first official release. In this week’s column, Kim and Georgi tell us about the band’s early days, favorite records, and bonding over John Waters.

Kim Prawn: Perhaps the B-52s first album? So many weird hits on that one and it would go down nicely on an island, I reckon.

KP: We have known each other for a long time now. We met as teenagers, probably at a party in someone’s backyard. We went to shows together (The Hives and Dead Kennedys were highlights) and fed into each other’s love of music and strange stuff. Then one day, we decided to mess around with instruments in a shed.

GG: Yes, that garage was in incubator for baby Shrimpwitch, and we played our first show in my backyard for my housemates’ debut festival Wetfest. After that we got asked by dozens of friends to play on their lineups, we were offered residencies at 2 of our favourite pubs and it all happened from there!

KP: We are from Melbourne, Australia and we are spoilt for choice when it comes to live music. There are excellent shows on every night of the week and a real community of people who love coming to gigs. We have multiple community radio stations and a heap of venues that are willing to take a chance on weird and interesting stuff. Y’know, not to brag, or anything…

GG: There’s been a huge shift in the music scene since we’ve been playing regarding more queer and femme band taking more space. We’re all really supportive. Our launch lineup reflects that.

KP: Georgi and I bonded over a shared love of John Waters movies. Once (or perhaps twice??) we even dressed as Pink Flamingos characters. I was Edie the Egg Lady and George was a very convincing Divine. It was filthy and fabulous.

KP: We just played the best festival in the world, Meredith Music Festival. It was the largest stage we’ve ever played and we got to close out the festival. Our set was right after the traditional nudie run, ‘The Gift’. That’s how we do it in Australia.