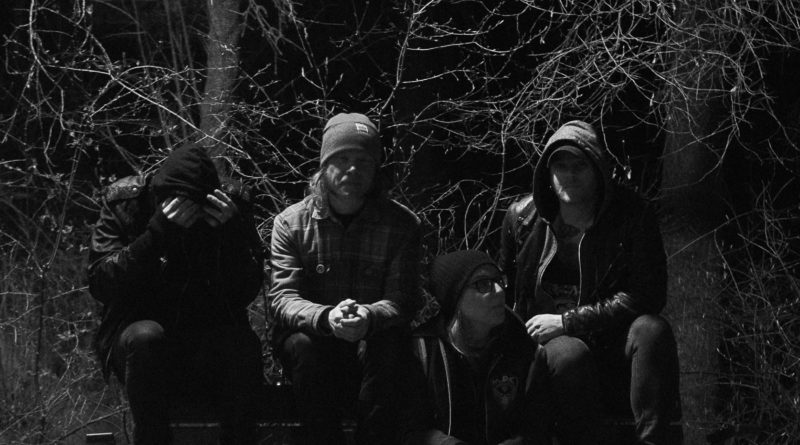 While putting together playlists for the show, I love finding new music from around the world (I mean, if I didn’t enjoy it this show wouldn’t exist). I also love when that music transcends borders. Śmierć is a great example in that the band is from Sweden; however, singer Ninka’s is inspired by the Polish punk scene. As a result, this fierce punk rock is delivered in the Polish language with the same grit of the band’s influences, such as Dezerter, Post Regiment, and Homomilitia.

Śmierć has almost finished recording seven new songs. They say the sound, while in the same vein as their debut record, has evolved to be “a bit heavier and spookier.” Ninka also said “I am also spitting out affirmations to the Universe so that we will get to tour Japan and any of the US coasts in 2020. I also have an art project going with my megaphone that I use on stage. The idea is that it should be like a wall of graffiti where different artists can paint their work. So shout out to artists around the world. Come and paint my megaphone! 🙂”

Krisse: I’ve know Ninka and Sumo for almost 20 years and I don’t really remember how, haha. Calle I met through Sumo (they play in another band together as well). Calle and Sumo started a little something and asked me if I wanted to join and when we had a few riffs we liked, we asked Ninka if she wanted to sing. After the first practice with the full band we knew we had something special.

Ninka: Yes, for me it was important to be creatively challenged. We all have been in so many different bands through the years and personally I needed this to involve something else than just d-beat, familiar riffs and predictable vocals. With the Polish punk scene of the 1990’s close to heart, I started digging in to the old songs, the poetry, the politics again and worked my way to the sound. But honestly, I am still just fooling around trying different stuff. It doesn’t always come out nice, but hey you won’t hear me apologize. Let’s just say it’s expressionist art and move on, ok? 😀

Calle: Chance brought us together.

Krisse: There’s lots of bands, but not so many venues. We have lots of amazing people doing the best with what they got though.

Ninka: I am 45 years old, I live in the capitol city and I am not a totally sure what the kids here and in the rest of the country are up to. But my general impression is that it is a more liberated climate than 10 years ago, when it comes to mixing genres. As if the younger generations aren’t as afraid of doing it wrong – they just do it. Also the epithet ”queer” has broaden our perspective of what is different and what is normal. I’ve been to several shows in places like independent art galleries or pub basements with for example a mixture of a spoken word artist, a punk band and a guy with a weird synthesizer giving us his last drop of blood so yeah, the underground scene is finding its way.

Sumo: It’s alive. But mostly in major cities, or at least as I know. Things happen all around Sweden in different ways.

Ninka: Poetry. Fashion. Walking the streets making up stories about people I walk by. My super talented and arty loved ones.

Krisse: for me it’s actually the last one we did. We played a show with Poison Idea on their (last?) European tour now in July. It was a fantastic show at a great venue with lots of friends.

Ninka: Yes, I agree with Krisse. The venue was great, so many friends showed up and Poison Idea delivered. On a personal level, the best was that I totally lost it. I lost track of who I am, how I was moving and the music was just flowing through me. That is part of the goal for me – not to be me, but to be an instrument of emotions, politics, echoes of the past and hints of the future. Sometimes it really sounds like shit, but you know…expressionist art, right?

Sumo: Hard to choose. All shows are unique and great!