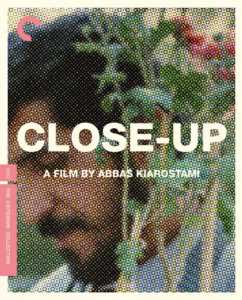 While the first two films I’ve spotlighted have been pure genre cinema (and make no apologies for it), Abbas Kiarostami’s 1990 movie Close Up is something else entirely. It’s a mystery of a sort, but it begins with the “revelation” and only becomes more opaque as it unravels. It’s also an exercise that blurs the lines between documentary and fiction in ways that still feel fresh even three decades later.

The movie opens with reporter Hossain Farazmand traveling by cab with two police officers to the home of the Ahankhah family, where they will confront a man named Hossain Sabzian who has been posing as the Iranian director Mohsen Makhmalbaf. It’s a depiction of a true event – Sabzian really did pass himself off as the director in Northern Tehran in the late 1980s. But it’s also more than that, because all of the characters are being “played” by themselves – that is, the real-life participants are recreating their experience for the camera of Kiarostami (who appears himself as a key engineer of events in the proceedings).

The rest of the film combines recreation of the events leading up to Sabzian’s arrest, courtroom footage of the actual trial, and real-time documentary footage of the events that transpire after Sabzian’s sentencing. Over the course of events, we come to understand at least in part the motivations behind Sabzian’s deception. But the reason that the movie is widely considered to be one of the greatest of all time is the way in which these motivations reveal something deeper about the reasons we create and are drawn to art (and cinema in particular) in the first place, as well as what effect it can actually have on our material conditions during the short time we’re granted here on earth.

I’ve been slowly working my way through Kiarostami’s filmography, although much of my experience until this point has been with his neorealist films of the 1970s. This represents a sharp turn in style from those earlier works, but not from his overriding sense of empathy for each and every one of his subjects – which resonates more deeply given our recent experience in social distancing, and perhaps offers inspiration (particularly in its closing moments) for where we go from here.