Look, I know very little about Poland beyond what I could glean by skimming a Wikipedia entry. Which is to say, I know Poland was invaded by the Nazis at the onset of World War II, bagels originated in Poland, and these days, it seems to be doing pretty well as “the eighth largest and one of the most dynamic economies in the European Union.” I also know that there’s a hell of a doom scene kicking in lovely ol’ Polska, and I have the Internet to thank for that bit of trivia!

Earlier this year (like, last month) I started seeing buzz around a forthcoming four-way split between the Polish bands Dopelord, Weedpecker, Major Kong and Spaceslug.

Dopelord and Spaceslug had already found their way into my Bandcamp recommendations and wishlists, so needless to say I was intrigued. When the split was released on Feb. 1, I was not disappointed. In four tracks, spanning almost 26 minutes, the split plants a flag for Poland with a remarkable fusion of doom metal, stoner rock and heavy-psych that feels much greater than the sum of its parts.

Dopelord’s “Toledo” opens like an extra Sleep-y Electric Wizard, riding a lumbering riff into a massive psych-rock rave-up before settling back into its foundational groove.

Weedpecker’s “Rise Above” nimbly balances COC-worthy sludge with spacious lava-lamp psychedelia that falls just this side of Elephant 6 pop.

The instrumental trio Major Kong offers “The Mechanism” a blast of fuzz-charged rock ‘n’ roll that ought to please fans of Black Tusk or early Kylesa.

And, finally, Spaceslug brings us back home with “Ahtmosphere,” a driving, almost motorik, heavy-psych meander that revels in its swelling, explosive dynamics.

If two is a coincidence, and three is a trend, certainly four strong bands are enough to anchor a scene. But the four-way split not only led me to the back catalogs of its four participants (of which, Dopelord’s 2017 album Children of the Haze is a personal favorite), it sent me down a rabbit hole of geotags and genre signifiers to find a handful of other, remarkable Polish acts playing in the loosely-defined stoner-doom scene.

January of this year saw the release of the instrumental trio Seedium’s debut EP, Awake. Among the more traditionally heavy offerings I found, Awake thrives in low-and-slow, fuzz-spackled riffs, but keeps things moving nicely with airy detours and melodic meanderings that fuse sludge and space-rock.

And the rabbit hole goes deeper still. From Seedium and Weird Tales, I found the more traditional doom of Shine’s 2018 LP Moon Wedding. Fusing riffs that suggest Saint Vitus and The Obsessed, the band’s occult stoner-rock hits all the sweet spots for genre purists.

On a more lighthearted trip, the hilariously named Belzebong gifted us with their own 2018 album, Light the Dankness. Here, the riffs are appropriately resinous, ripping deep Iommic grooves through sheets of phase-shifting (and face-shifting?) fuzz. Fans of Dopethrone and Bongripper won’t be disappointed.

Suffice it to say, heshers looking for a new passport stamp could do worse than to tune in and drop out (and drop-tune) with Poland’s mighty and varied doom crews. 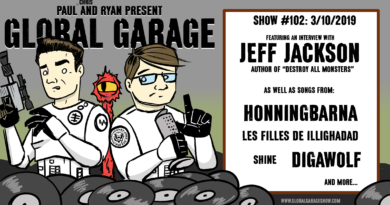